This is a very brief summary, giving you more information about the different ways of treating moss on asphalt/composition/comp/3-tab shingles and concrete tile (not cedar-shake roofs).

COMPOSITION ROOFS - Composition roofs have granules on the surface that are made of a ceramic. They protect the water-resistant properties of the tar and asphalt in the shingles. When the granules are gone, it allows the tar to be exposed to the ultraviolet (UV) light. The UV light degrades the oils in the asphalt and cause it to dry out. The drying out of the shingle causes cracks or "spiders" (it can looks like web). This also causes it to become more brittle and break off (in wind) etc. Granules on shingles are like paint is to your car. The granules need taken care of so that the shingles lifetime is maximized. 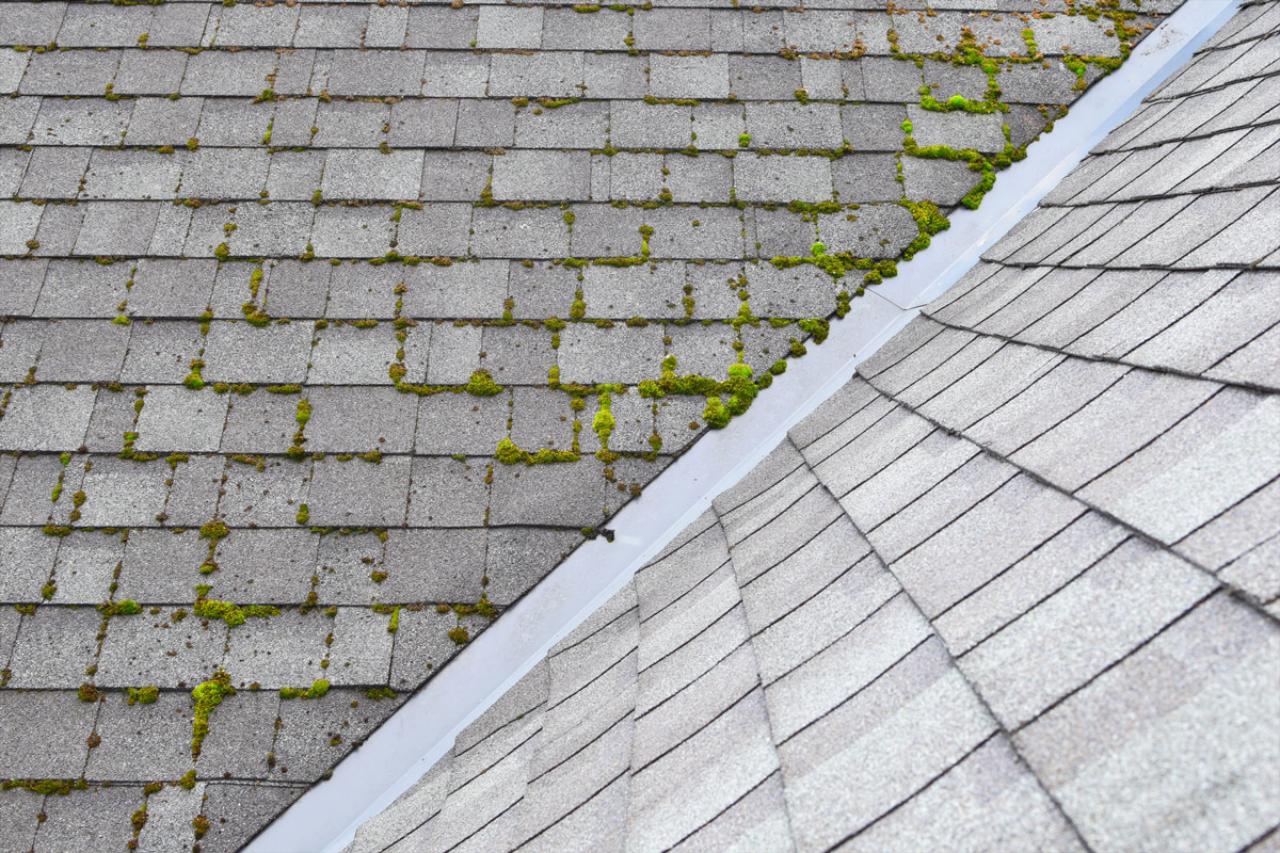 ZINC SULPHATE - Kills moss completely. Takes one trip when applied as correctly. Makes moss shrivel up and often darken in color (less noticeable). Leaves residue on roof (lasts about a year) that prevents future moss growth. So effective that I guarantee it will kill the moss and no regrowth for at least one year. This is longest lasting chemical moss preventative. When applied correctly in liquid solution, treatments often last 3-7 years.
LAUNDRY DETERGENT - Kills moss quickly. Makes moss turn yellow and light green. It may dry out the roof and lead to granule loss if not washed off soon after application. This destroys the roof you are trying to protect. Only solution if you want to use this is to keep the detergent wet for 15 minutes and then wash it off the roof thoroughly. Bleach water solution is better alternative. It may help reduce or remove some roof stains by algae or mildew.
ZINC STRIPS - Not very effective. Requires 4 inch exposure every 2 feet down your roof to prevent moss. Will not kill existing moss. Installation is time-consuming. Installation requires nails hammered into your roof. It weathers poorly, some strips break and flap around in wind. Cupping and curling cause uneven water distribution and appears to streak the roof. Very expensive to apply all required zinc strips to prevent moss. For all these reasons, I do not install zinc strips.
BLEACH WATER SOLUTION - A milder solution of bleach water can be sprayed on the roof to kill moss. This turns the moss lighter in color (yellow and lighter green) and helps remove some staining caused by mildew and algae. Do not treat your roof with using too strong of bleach solution. This will cause granule loss when the asphalt in the shingles lose their grip on the granules. A bleach solution will kill the moss quickly, but will not prevent future moss growth.
MECHANICAL BRUSHING - This may cause granule loss if aggressive brushing is done unless the moss is killed first. Otherwise the moss' rhizomes (like roots) cling to the granules and the granules come off with the moss. Brushing off live moss causes the rhizomes to spread and causes the moss to spread. Only temporarily effective. This method is effective for treating small areas of very heavy moss growth prior to treating the moss. Also effective after the moss has been killed. Labor-intensive process on live moss. I recommend scraping where possible, light brushing in some spots for aesthetics but better to kill moss first typically. Ligh mechanical brushing is often done on dry days after moss has been killed.
PRESSURE WASHING - Causes more granule loss than brushing. Commonly known among contractors to remove 5-10 years from life of roof from granule loss. Commonly known to cause water damage and leaks around skylights due to water dispersion from wand tip. Removes moss quickly. Very messy when gutters overflow onto house siding and landscaping. Health issues with moss and mildew spores being blown into air. Should wear respirator. Moss pressure-washed off the roof may land in landscape and begin growing there if climate suits species. Not an option for older shingles that have fewer granules already. Better (if ever used) on newer roofs that will not show granule loss as much if in hurry to get house roof looking nicer before selling it. Offers zero moss prevention and spreads moss on roof. Shingles may be torn off by pressure-washing hose. Water, mildew and moss particles can get blown between the shingles. Pressure washing concrete tile roof can void warranty if roof isn't treated with sealer afterwards. Pressure washing concrete tile will also cause water, dirt and mildew to accumulate behind and begin rotting wooden ledges that the tile hangs on.
AMMONIATED - Soap of Fatty Acids - Often touted as a "safe" alternative, my experience has resulted in marginal effectiveness and an unwanted layer of fat on the roof. Be extra careful if you use this product that you don't slip on your roof when the fat is up there. Offers little if any moss preventative. DO NOT Mix with other chemicals or you may get a white oxide formation in the fat. I have seen this on the roof of a house being sold. Disastrous appearance. May be best for smaller sheds around gardens where multiple and or more frequent applications may not be a problem.